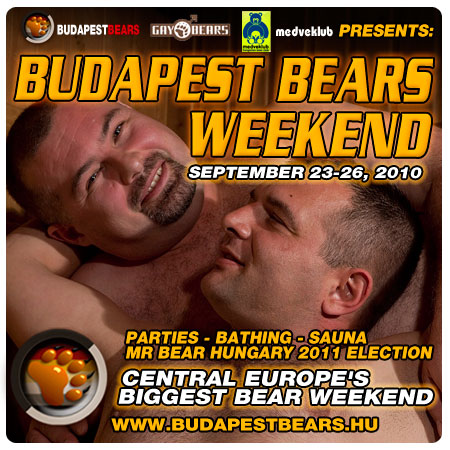 Your place to get acquainted with other participants and purchase advance tickets.

The Király Fürdő ( King‘s bath) is a popular hangout for gay men, but is not an official gay venue. Bring soap, towel and bathing suit with you. The baths are open until 10 pm.

Where: Habroló, Funny Carrot. Szép utca 1 (near the Ferenciek Tere)

Your place to get acquainted with other participants and purchase advance tickets.

Meet this years contestants and last year’s winners in person at this popular Budapest bar and cruising club.

Where: Get together at Zoo entrance, Állatkerti körút 6-12 (Int he város liget, near Heroe’s square)

Spend the afternoon getting to know real animals.

Election show starts at 8 pm. The sauna stays oppened non stop until Sunday midnight. You can come back with your ticket until 6 am.

Where:  Sziget Klub, on Margaret island at the Margit bridge entrance on the left side.

Where: to be announced

Price: to be announced

Spaces for the Sunday lunch must be reserved and paid in advance.

Where: Habroló, Funny Carrot. Szép utca 1 (near the Ferenciek Tere)

To say goodbye… and see next year.

You can buy tickets for any events at the door on the day of the event.

Tickets are also available in advance at a reduced rate for the following events: